Fancy a 12-thread i9 in your gaming laptop?

Intel’s assault on mobile computing enters a new phase as the company announced its 8th-gen mobile CPUs, including for the first time (for Intel), five new 6/12 thread mobile parts.

Alongside the seven new performance parts, Intel also has four new standard mobile CPUs, for a total of 11 mobile 8th-gen CPUs. Among these are a i9 part (also the first time this series, albeit quite new, has a mobile version) and two new Xeons.

ABOVE: The performance mobile CPUs

One, and just one, is fully unlocked and overclockable — being the highest-end i9-8950HK, which is no surprise given that these mobile i9 CPUs are effectively cherry picked i7s for better thermal range – however another (the i7-8860H) is “partially’ unlocked, specifically meaning it can be overclocked by up to 400MHz.

ABOVE: The value range

But that’s far from the end of the overclocking party, Intel introduced its new Thermal Velocity Boost, though this is only available for the Core i9-8950HK part. It boosts a single core by an additional 200MHz over stock Turbo when the CPU is at 50c or less. It is automatic and workload dependent and also depends on available power.

The new mobile CPUs come in under either the U-Series badge covering i3, i5 and i7 mainstream parts, and the H-Series for the performance products that cover higher-end i5, i7 and i9 including the Radeon Vega IGP products.

All are manufactured on the 14nm++ process and are claimed to be nearly 30% faster than the 7th-gen CPUs from this time last year. We look forward to testing this!

ABOVE: Where we’re up to in Intel’s 8th-gen roadmap

An improved version of Optane comes to the 8th-gen mobile platform, along with a new marketing badge for systems that ship with an installed Optane module (“i5+, i7+ and i9+”).
Unlike previous Optane implementations which cached and boosted OS drive performance, it can now be used to boost performance of data drives – as in, your Steam and app drive. Intel call it Data Drive Acceleration, sensibly. It cannot be used for BOTH the data drive AND OS drive. That’s a limitation of the driver, I was told, not anything like PCIe lanes or the currently small capacity of Optane products. Most gaming laptops are sold with a large capacity hard drives so it makes sense to Optane-boost that instead of a smaller OS SATA SSD — assuming it has one.

The whole idea — at least as far as the gaming-centric pitch was concerned — is for quicker loading times in games. Intel quoted an almost doubling on a level loading demo of 10 seconds with Optane vs 18 seconds without, plus a few more FPS in some games. This was in a comparison against a TLC SATA SSD.

Optane was also touted as being a perfect fit for content creation, with an eSport professional on a pre-record telling us that “the quicker the guys can get footage out there the better they do.” 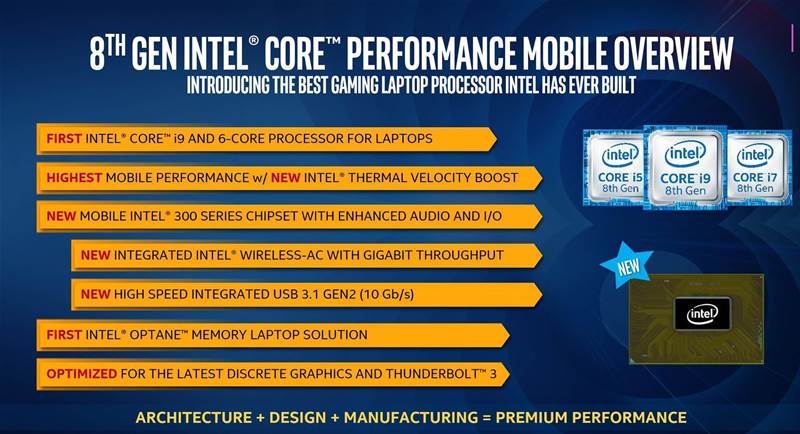 ABOVE: The key new features in this rollout

Also launched was a tweaked version of the 802.11ac Wi-Fi standard. Known as “Intel Wireless AC 2×2 160MHz”, the 2×2 refers to the antenna count which now work as MU-MIMO, while the baseline AC speed of 80GHz is doubled. More improvement comes from Intel putting some Wi-Fi bits on the chipset, being the MAC component, while the Fi is still done on separate chip/s.

The desktop products are equally expansive though came in a distant second place in terms of hype at the launch event. Perhaps because the emphasis was on gaming and the new desktop CPUs and platforms are decidedly mainstream. Most of the range covers i3 and i5, and six of the nine new CPUs are low power. There is but one i7 and that too is a low power item.

Pricing is key here, at this stage only US pricing for the channel was announced (in lots of 1,000), but at first glance these will be competitive with AMD’s value offerings. 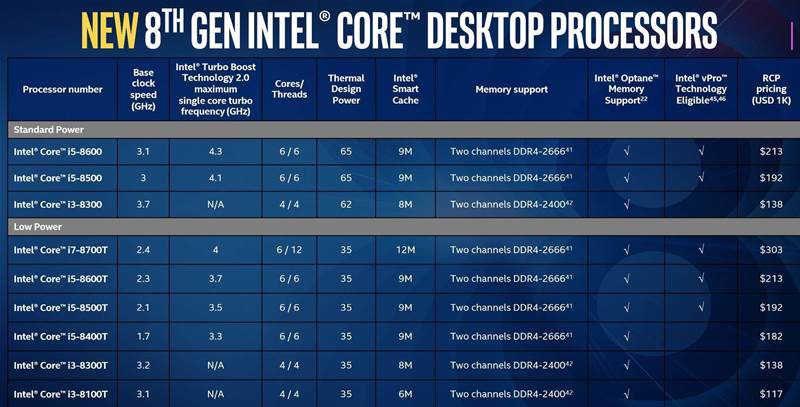 ABOVE: What’s new in the 8th-gen desktop range

Intel has supported the value CPUs with the expected H, Q and B versions of the 300 series chipset. These range from the super basic H310 with just six PCIe 3.0 lanes to the relatively more featured Q370 with 24 lanes and 14 USB ports. These should offer appealing implementations in budget gamer boards that compare relatively well in basic performance with the pricier Z370 series.

ABOVE: How the new non-Z chipsets stack up

The new chipset also offers similar new features to the mobile platform, with the same Data Drive support for Optane, faster wake from sleep (claimed less than one second) and Intel’s new Wake on Voice feature, along with support for Alexa. Support for other digital personal assistants is expected and has been implemented on a hardware level by Intel. 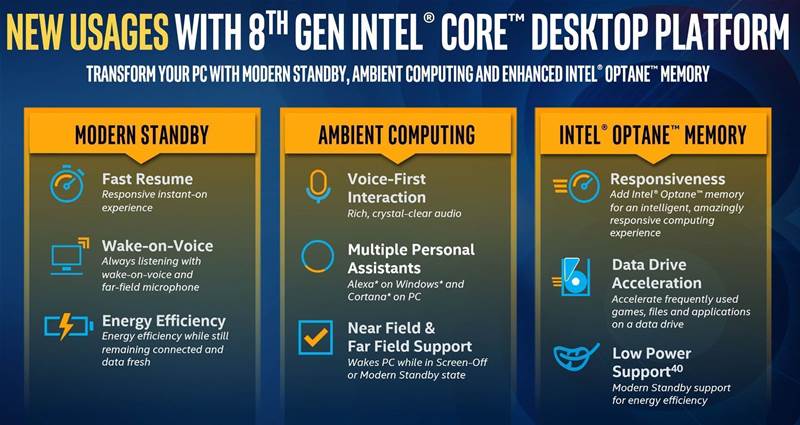 IT’S ALL ABOUT GAMING

Gaming has taken an increasingly front row seat with Intel’s marketing and here it was all of everything, almost. The first 20 minutes of the presentation was gaming and nothing but. Given that the global launch was in Beijing it made sense for Intel to underline just how important gaming is. The Chinese market is driving a massive global surge in gaming laptop sales. No other category comes close in terms of growth and sheer domination. 56% of all gaming laptops last year were sold in China, and here in China gaming laptop sales grew by 52% in the last year. Massive.

The spinoff affects the rest of the world. The demand for gaming laptops is by no means unique to China — it’s just that this territory has the biggest numbers. Thus, worldwide demand is being met by this diverse range of new CPUs from Intel, from super-budget i3s through to the meaty i9 – and this is no paper launch, dozens of machines are ready to roll from pretty much every OEM.

Interestingly, in China the student market accounts for the bulk of gaming laptop sales, and I took the opportunity to ask a few locals just how such expensive products are snapped up by (mostly) budget conscious students. It’s because this is largely the only high value thing they buy. They don’t have a car, but they identify as gamers and this need the latest and best.

As an aside, I’m writing this during Dell’s launch of its 8th-gen laptops and something just a bit jaw-dropping is going down. The Account Director and assigned spokesperson for Dell’s gaming range, Sally Zhang, is giving the presentation about the new gaming laptops and has talked for at least five minutes about how “plugins” (cheats) demand greater CPU power in the game “Chicken Dinner” (PUBG).

She spoke of how Chinese gamers are the most innovative and dominant in the world by using “plugins” to, for example, run faster than other players, or blow up ten cars at a time, and that these top gamers can really use 8th-Gen power to “run more plugins to win more at Chicken Dinner”, and that the top players run the most ‘plugins’ so that’s where 8th-gen Dell power gives them the gamer’s edge. Behind her a video proudly shows various cheats in PUBG in action (they really like the one with the massively oversized gun and show that a lot), with the new Dell gaming laptops shown every few seconds while Sally told us that gamers should buy a Dell because they’re better at running many plugins. Wow.

POWER FOR OTHER THINGS

It’s not ALL about gaming. Around a third of workstations sold are laptops, so the new 6/12 core products should do well in that category. Streaming is now a focus and Intel didn’t hold back when touting the multi-core advantages for those that need cores for gaming, recording and streaming, without one stalling the others.

Some may say that it is AMD’s Ryzen range that spurred Intel’s move beyond 4 cores, and there is some truth in that but applications now demand more and last year’s 6/12 core i7-8700K (Intel’s first consumer CPU in that configuration) turned out to sell more units than ANY i7 before it.

So there’s a lot of confidence within Intel that beyond-4-core CPUs have a home in mobile. OEMs agree. It’s actually quite an exciting new range of CPUs, accompanied by some beastly new laptops.

I'm a true gamer. I'm not a pro gamer but ill never stop playing games. My choice of console is PlayStation, but each to their own. I unfortunately do not get as much time as i would like to still play games, but when i do, i love it!
Previous Intel's new 8th-gen mobile monsters, and some new desktop CPUs
Next Team Rocket blast off into Pokémon Go's wardrobe